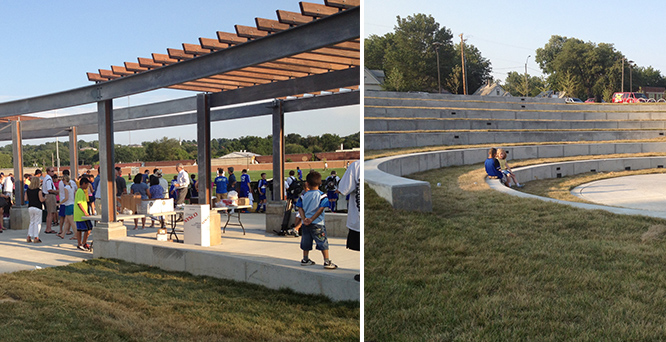 It’s hard to imagine now that the space at 9th and Van Brunt used to be the headquarters of the Area Transportation Authority and its street cars which it later abandoned leaving an eyesore. What had been an overgrown wasteland has become athletic fields with a new artificial turf soccer field, two natural turf practice fields, stadium lighting, an amphitheater, event plaza, concession building with restrooms, paved parking lot, walking trail and professional landscaping.

“With civic projects there is a great opportunity to really impact the larger community around the site in a lot of different ways,” Kerry Newman, Principal at SFS Architecture told KMBZ. He said this project and others in underserved areas like it create “social gathering spaces where people can come together, build connections and share pride in their community.”

For 43 years SFS Architecture has been the go to firm for community investments that contribute to revitalizing neighborhoods and improving quality of life for residents. It was selected to design the redevelopment of 9th and Van Brunt by joining forces with community, city and federal partners that made the athletic complex possible. Roughly $2.6 million was invested in the site which included federal funds, money from the city’s Public Improvements Advisory Committee and a grant from the U.S. Soccer Foundation to install high quality artificial turf.

“It’s extremely rewarding to work on projects that impact the lives of the people that directly live, work, play, learn and worship in the facilities,” said Newman.

Next, SFS Architecture turns its focus to helping transform the former King Louie bowling alley and ice skating rink in Overland Park into the Johnson County Arts and Heritage Center. Newman described the 1960s-era building as “iconic.” He said that when SFS Architecture works with community groups and organizations his award winning team looks at the long term cost of the facility which “greatly outweighs the first time cost.”
Most facilities are designed for a 30 to 50 year life span so it’s essential to view each project from a long term perspective especially with regard to reducing maintenance and operating costs over time. “Projects like this offer a great opportunity to encourage broader development,” said Newman.

Other arts and cultural offerings at the center are to include an indoor theater which will allow The Theatre in the Park to offer year-round performances. Johnson County Parks and Recreation plans to expand its arts classes and lessons for children and adults there and Johnson County Developmental Supports will roll out a program for emerging artists in the facility.

To listen: Transforming Communities with Architecture

Add to ebook
Share this
Prev
Next
More Stories